There aren't many Trethowan's in the U.S., thought, I was surprised to find quite a few in Australia.  I wonder why?  Knowing the history of the Cornish and especially the Trethowan's I should not be surprised.  According to my cousin David Curry, we were a clever if not larcenous lot.  Though, I am sure it was for the mining  ("Where there is a hole in the ground, you will find a Cornishman").

Our Father, Ronald, passed away Aug. 2004  He and his wife Carol sailed the south pacific on a 32 foot sailing vessel.  There will be a page dedicated to his memory.

Below is a family portrait from circa 1900.  The gentleman to the lower right is my great grandfather, Thomas Trethowan.  I was told by my cornish cousins that he was the Brew Master in his town.  I don't know the town that this photo was taken, though my cousin Dave who gave me this photo lives in Lanner.  The young boy in the sailor suit is my grandfather, Charles.   My grandfather came to America when he was sixteen with his older brother (Jack)?   It is also said that his two sisters went to Australia to peruse Opera careers.  I would like to know more about the other persons in this Old Photo. 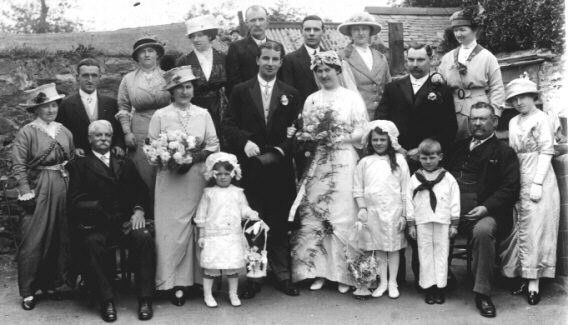 It is an assumption on my part, but I believe Jack is the one standing behind my grandfather.  There was a large difference in age between the two. I found a reference to a Charles Trethowan in a 1910 census taken in Ohio, though none to a Jack Trethowan.

My grand father died in 1974, well before I could ever appreciate any stories he may have wished to impart.  My brother and I have long tried to find our generational roots and the meaning of our name Trethowan.  There are few clues.  Our family doesn't show up in any of the census reports or passenger lists.


Family Lore
My family knows little of our cornish roots.  We have had a few stories handed down to us. One tale is that there were two families with the Trethowan name, though not related.  The other deals with my grandfather and his brother Jack.  I found that they entered the U.S. by way of Canada.  For purposes of residence papers, once in the states, Jack married an innkeeper and my grandfather married her daughter.

Another story has a cousin of my grandfather moving to New York to pursue an acting career.  He had changed his name to either England or English.  I remember in 1971 finding the name of Trethowan appear in the 1969(?) almanac of famous names.  He had was a base ball player in New York.  A long time has passed since I read that, so I must try to find the book once again.

I have gathered some information on the Trethowan Surname.  It can be found by following this link: Origins Of The Trethowan Name

A Side Project Named "Topics" Topics